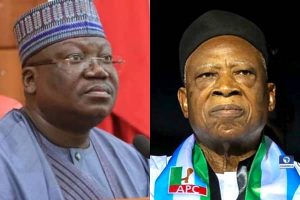 Contrary the position of most Northern Governors on power shift to the South National Chairman of the All Progressives Congress, Senator Abdullahi Adamu has announced Senate president Ahmad Lawan as APC consensus presidential candidate.

Adamu, announced this at the meeting of the National Working Committee, NWC, on Monday, in Abuja.

However, some members of the NWC, sources said, kicked against the move and insisted that other Presidential aspirants which include Asiwaju Bola Tinubu, Vice President Yemi Osinbajo, Dr Kayode Fayemi, Engr. David Umahi must be allowed to contest the primary election at tomorrow’s convention scheduled at Eagle Square, Abuja.

Adamu’s adoption of Lawan as consensus candidate is against the position of 11 APC northern governors who endorsed that power must shift to the South after President Muhammadu Buhari’s tenure.

Adamu told the NWC that he arrived at the choice of Lawan after consultation with President Buhari.

The meeting is coming a day before the commencement of the party’s convention to elect its presidential candidate for the 2023 general elections.

Although President Buhari has maintained his position on the consensus arrangement, there has not been any agreement among the 23 presidential aspirants.

The meeting with the APC governors from the North is the fourth parley in his effort to ensure that the party presents a consensus candidate so as to reduce acrimony that may arise at the end of the convention. 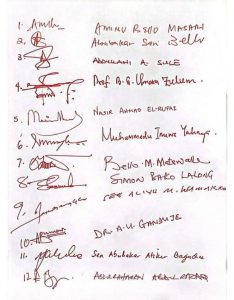 At the time of sending this report, only the governor of kogi state was yet to arrive
Bello is also a presidential aspirant.

The Chairman of the Northern States Governors’ Forum, Governor Simon Lalong of Plateau State, briefed State House reporters after the meeting with the president at the Presidential Villa in Abuja.

He said the 13 of them apologised to the president for receiving the information about their position after it was leaked.

The governor, however, said that they took the decision in the interest of justice and peace in the country.

Lalong, who stated that they would hold another meeting by 5pm today among themselves, said the president agreed with their position and maintained that the presidential candidate must emerge through a transparent process.

He said President Buhari told them he did not have an anointed candidate for now and directed them to meet the party’s National Working Committee (NWC) to agree on the succession plan.

On the absence of the Governor of Kogi State at the meeting where the power shift decision was taken, he said his colleague was not part of the agreement as his signature was not on the statement.

In his contribution, Governor Nasir El-Rufai of Kaduna State said it was the democratic right of Kogi governor