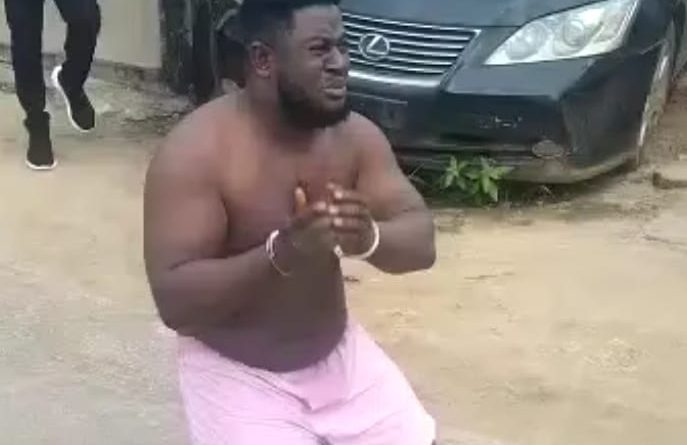 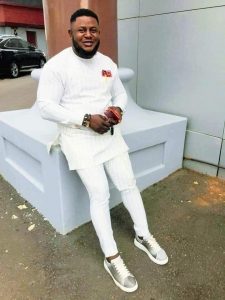 Abuja, Federal Capital Territory (FCT) based ‘Big Boy,’ John Ewa, known as Lion  has been handcuffed and paraded partly naked by Beyelsa operatives over allegations that he was involved in serial kidnapping and reign of terror in Bayelsa State in South- South geopolitical zone of Nigeria.

John Iion, an alleged millionaire kidnapper, an ex -staff of a second generation bank, was tracked and arrested in one of the high brow area of the FCT. 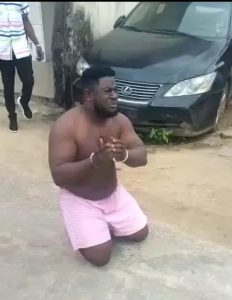 The suspect confessed in a video to have been behind the kidnap of a bank manager, who paid N60 million ransom.

According to available information, Ewa, who is from the South East, is a top member of a kidnap syndicate terrorizing  Yenagoa, Bayelsa State. Lion is well known in Yenagoa, for his  lavish lifestyle in Clubs and bars.

Sources in the Bayelsa State Police Command said the road to the arrest of Ewa was paved by one of the latest kidnaps. One of the victims identified Ewa in a video in which he confessed to have taken part in “only two” kidnap operations.

He was said to have used his position as a banker to glean information of would-be targets. 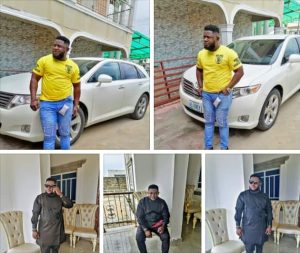 The operatives of Operation Puff Adder of the Bayelsa State Police Command arrested two suspects in connection with the abduction of a top executive of Premium Trust Bank in the state.

It was gathered that the kidnap suspects reportedly collected N60 million ransom over Emeije’s abduction. 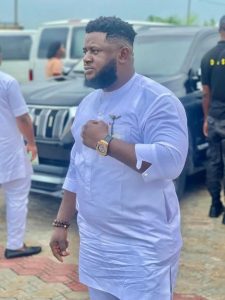 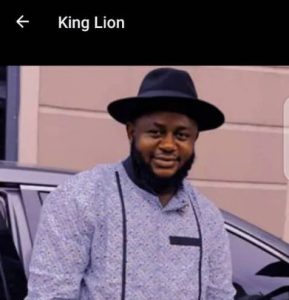 The blue Toyota Corolla vehicle used for the operation was also recovered by the police, a close relative of the banker, who pleaded anonymity, confirmed the arrest of the suspects.

He said: “When Danjuma Emeije came back from the Operation Puff Adder’s office in Yenagoa, he was visibly shaking after seeing those involved in his horrifying kidnap.”

Spokesman for the Bayelsa State Police Command, SP Asinim Butswat, said: “Investigation is ongoing and the police are making progress.”