The Director-General of the Debt Management Office (DMO), Mrs. Patience Oniha, has confirmed that Nigeria’s debt profile as at March 2022 stands at N41.60 trillion.

Oniha, during her appearance at the ongoing engagement on the 2023 – 2025 Medium Term Expenditure Framework (MTEF) and Fiscal Policy Paper held by the House of Representatives Committee on Finance Thursday, attributed Nigeria’s high debt profile to a lack of revenues and approval of the annual budget with a deficit by the National Assembly which increased the debt stock of the country.

While responding to a question on the actual debt stock for the federal and subnational governments, she disclosed that 85 per cent of the total debt stock is owed by Federal Government while about 15 per cent is owed by the State Governments and Federal Capital Territory (FCT).

In the bid to reduce the debt rate, she tasked the Parliament to query the 2023 budget proposal, noting that the country’s dependence on borrowing was due to low revenue generation and deficit budget spanning several years.
Furthermore, she stated that: “A world Bank report showed that in terms of debt to GDP ratio, Nigeria is low but for debt service to revenue ratio, we are very high. So, if you look at tax to GDP ratio of these other countries, they are in multiples of Nigeria.

Her words, “The World Bank survey report of about 197 countries revealed that Nigeria is number 195, meaning we beat only two countries and that was Yemen and Afghanistan and I don’t think we want to be like those places.

“When the MTEF for 2021 to 2023 was being prepared, it is to say, let’s begin to look at revenues because as debt is growing, debt services are increasing. So, the language we used was for debt to be sustainable in the medium term. Sustainable means you can service your debt without difficulty, without it consuming all your revenues because you have very little for other projects.

“You must look at revenues very closely and I think the discussions you have had with the Customs is part of it. There are many other revenue-generating agencies. So, we must increasingly begin to look out for our revenue for funding out activities as opposed to deficit.

“We talk about N11 trillion deficit and borrowing for 2023, how much is the revenue there? That’s one. When we look at the first tranche that was N10 trillion for full year of subsidy and N9 trillion for subsidy next year, the size of the borrowing was 62 per cent of the budget. That’s high. The responsibilities, I think, are on both sides. Query the various expenditure lines and see what it is we can handle. So, if the deficit is lower, the borrowing will be lower and that’s how to grow on a slower pace.”

The deputy chairman of the committee, Hon. Saidu Abdullahi, who presided at the session, said: “The country was on a good pedestal to keep borrowing.

The need for borrowing will always be there. It doesn’t matter how much we make, the country must borrow. What we should be interested in is the sustainability of what we are borrowing and from what she has said, the country is on a good pedestal in terms of managing its borrowing.” 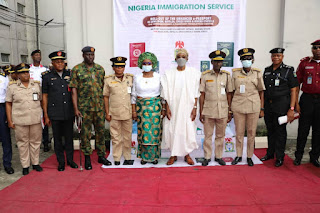