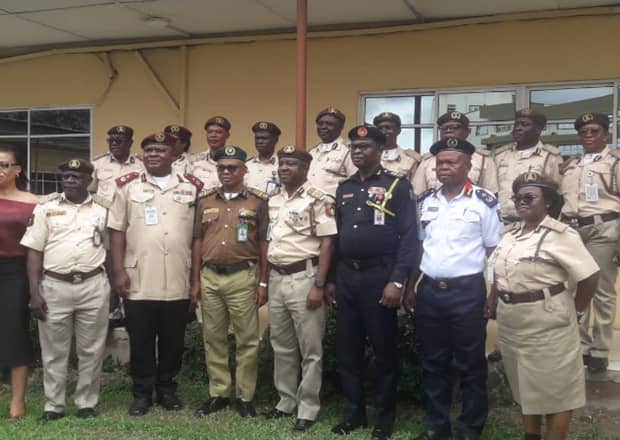 The Assistant Comptroller-General of Immigration Service, Zone ‘A’, Lagos Olakunle.G Osisanya has urged the newly promoted officers to work hard to justify their promotion.

The Nigeria Immigration Service (NIS), Zone A, Zonal Coordinator, Assistant Comptroller General ( ACG), Olakunle G. Osisanya has enjoined the newly promoted officers of the service to be  dedicated to work to justify promotion, as the service will continue providing an enabling environment for them to prove themselves through training, capacity building to reward and recognize hard work.

ACG Osisanya stated this at the decoration ceremony of 298 newly promoted and upgraded officers in ikeja Zone A, Zonal Headquarters Lagos on Thursday.

Addressing men officers and men of the zone at the occasion, ACG Osisanya commended the efforts of the CGIS.
His words, “The Comptroller General  of Immigration Service (CGIS), I.J Iris earlier identify officer’s welfare as essential in improving personnel’s productivity. This massive promotion we just witnessed is a demonstration of that commitment”.

“Sequel to the 2021 promotion exercise, a total of 298 officers in the zone benefitted. The breakdown, 244 were promoted and 54 officers were upgraded to the rank of Assistant Superintendent II.”

“The 21st century Nigerian Immigration Service is a knowledge-based and ICT-driven agency, which requires that officers and men should not relent in their quest to acquire more knowledge that would be relevant to modern day migration management”, he added.

He noted that the 21st century Nigerian Immigration Service is a knowledge-based and ICT-driven agency, which requires that officers and men should not relent in their quest to acquire more knowledge that would be relevant to modern day migration management.

ACG Osisanya congratulated the newly promoted officers for their hard work and professional excellence and urged them not to relent in their efforts to justify their promotion. 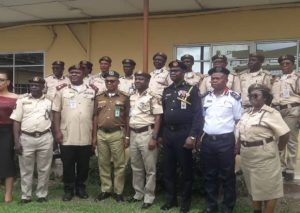 A cross section of the officers of NIS and other senior officers from other sister agencies at the decoration ceremony. 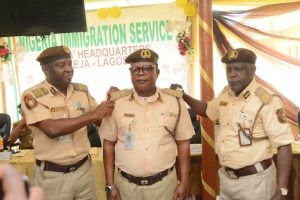 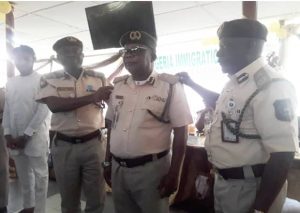 The Deputy Corps Commander of Federal Road Safety, Anthony Daudu, in his remark quoted verses from the scriptures in Psalm 75 verse 6 and 7, which means promotion comes from God. He urged the newly promoted officers to use their ranks/positions to do what is right.

Ogun state command, Comptroller of Immigration, Yakubu Umar Jibrin, on his part congratulated the newly promoted officers, he however charged them to justify their promotion by increasing the level of their commitment and dedicated to the demands of their new ranks, noting that promotion comes with additional responsibilities.

DCC Daudu who represented ACM Peter Kibo charged the newly promoted officers in quote to “Do what is right with your rank; don’t join those who are causing confusion.
There’s so much you can do with your rank, I pray God to help you.” 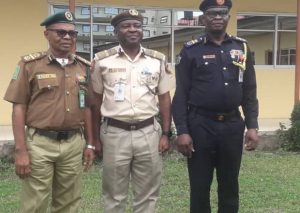 In like manner, The ACG, Nigerian Correctional Service, Zone A, Alagbo Ailewon Noel, admonished the newly promoted officers to see their promotion as an act of God for which they owe him gratitude. He charged those who were not promoted now to be hopeful, Patience and understand that they were doing well in other aspects of life. “Believe that God will promote them in other areas of life.”

He encouraged all those who were not promoted to remain committed and dedicated in their duties while awaiting their own promotion. 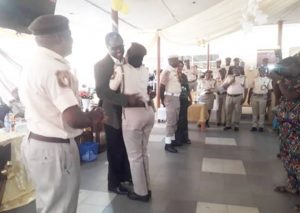 Cross section of the newly promoted Deputy PRO of the NIS, Zone A, Lagos.

Also speaking, DCC S. N Amobi, Nigeria Security and Civil Defence, NSCDC Zone A headquarters, Lagos Island admonished the newly promoted officers to join hands in the fight against insecurity in Nigeria
.
He noted the fact that, most of those people involved in banditry and terrorism are not Nigerians, urged the officers to requite their promotion with diligence and commitment.

Some of the officers promoted include,

In conclusion, the Public Relations Officer of Zone A, DCI Ojo Raphael Akinwumi, in vote of thanks on behalf of the newly promoted officers showed appreciation to the Comptroller-General of Immigration Service, I.J Idris and ACG Osisanya for finding them worthy of the promotion.

He promised that they wont let down the confidence reposed in them and anytime duty calls, they would always be available.

DCI Ojo however prayed using the promotion as a point of contact for those expecting their promotion as well.

In attendance were some senior officers from sister agencies. 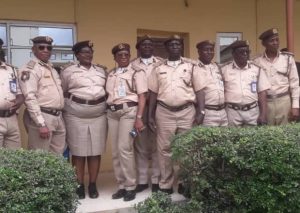