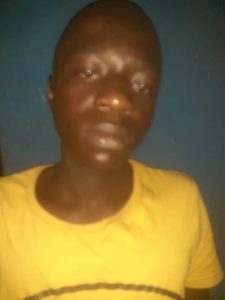 Police operatives have arrested a suspected notorious robber, named Emmanuel Godwin of Liberty Association Ogijo, M, 19yrs, who broke into a house in Ogijo at about 8:00 pm on the 12th of june 2022.

The arrest follows after man named Shaka Idakpo, of

The arrest follows after man named Shaka Idakpo, of Liberty Tungba FM in Ogijo Lodged a complaint that he received a phone call from his neighbour, that an unknown person has broken his door, entered and ransacked his room, fortunately for the complainant, his neighbour locked the robber inside his room.

Based on the information, the DPO Ogijo, CSP Omoh, and his men swung into action, moved to the scene.

The robber on noticing the arrival of the police broke the burglary and tried to escape, he was chased and arrested.

During interrogation, the robber confessed of being a notorious robber, responsible for constantly robbing the complainant. He admitted to have stolen money about six times, from the same house.

The suspect is helping with useful information, the case has been transferred to the Police command, Eleweran, Abeokuta, for further investigation and would be charged to court as soon as possible.