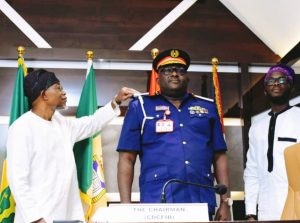 In a statement E-signed and released by the Director, Public Relations NSCDC National Headquarters, DCC Olusola Odumosu noted that the Minister of Interior, Ogbeni Rauf Aregbosola, has decorated five new DCGs of the Nigeria Security and Civil Defence Corps (NSCDC) alongside four of their counterparts from the Nigeria Immigration Service at the Civil Defence, Correctional, Fire and Immigration Services Board, Abuja. 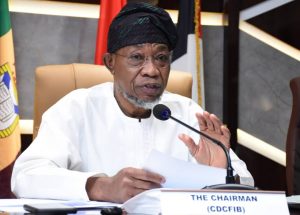 While congratulating the newly decorated officers on their elevation, the Minister who doubles as the Chairman, Civil Defence, Correctional, Fire and Immigration Services Board (CDCFIB), charged the nine newly confirmed DCGs to see their promotion as a call to higher service and advised each of them to provide quality leadership in their various services by leveraging on their wealth of experience to play extra-ordinary roles in their agencies, noting that their acceleration has come at the most challenging time in Nigeria’s history.

According to Aregbesola, threats arising from insecurity perpetrated by those he described as enemies of the country require experienced players like the crop of newly decorated DCGs to deal with the problem decisively and expressed confidence in their capabilities considering the local and international training and exposure they have had over the years, which, has bestowed on them the required knowledge and skills to solve the myriads of security challenges in the country today. 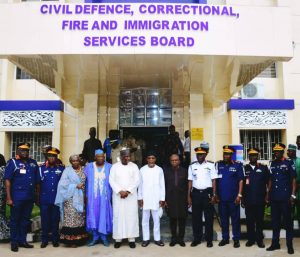 Specifically, Aregbesola tasked the new Deputy Commandants General of NSCDC to go after the perpetrators of the gruesome murder of innocent worshipers in a Catholic church in Owo town, Ondo state, by playing direct roles rather than a complementary one in confronting the menace of bandits attacks and killings of innocent souls across the country.

“We must put an end to all criminals playing with the intelligence of the Nigerian state, you have no excuse whatsoever not to perform going by the level of training you have received both locally and Internationally and I charge you to launch your arsenals against the perpetrators of Owo church attack, play a direct role and not a complementary role but synergize with other security agencies to fish the criminals out and let’s bring them to Justice”, the Minister said.

He further admonished the Commandant General to use his instruments of grassroot penetration and Intelligence to unearth the heartless criminals and effect necessary arrest of those nefarious elements attacking innocent citizens and disturbing the peace of the nation.

The Permanent Secretary, Ministry of Interior, Dr Shuaib Belgore, on his part, remarked that the promotion of the DCGs was guided by extant laws and regulations after thorough screening and urged the officers to deploy their experience in the attainment of their agencies mandates because the interior ministry has recognition for dedication, patriotism, effeciency amongst other considerations.

Earlier in his address of welcome, the Honourable Commissioner in charge of Appointment and Promotion, Major General Etim Bassey (Rtd), said the criteria considered for the elevation of the DCGs who represent different Geopolitical zones include written examinations, oral interviews, merit, seniority and annual performance appraisal. 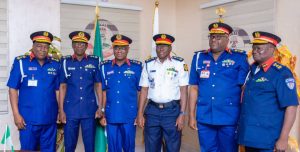 Responding at the end of the ceremony, the Commandant General, Ahmed Abubakar Audi, PhD, mni, thanked the Minister of Interior, the Permanent Secretary and the Management of the Board for confirming the DCGs for the NSCDC, stressing that the service will not disappoint the ministry of interior and by extension Federal Republic of Nigeria. He charged the newly confirmed DCGs to improve on their performance in order to achieve the vision and mission of the Corps,

He commended the Minister for his leadership style and for always bringing all the agencies under his purview together to refocus their operational lenses through constant mentoring and support, noting that such action promotes cohesion, sense of belonging, determination for success and above all, motivation for all personnel of the agencies under the supervision of the Ministry.

Each of the DCGs were symbolically decorated with their new ranks by the Minister of Interior assisted by spouses and relations after their citations were read by the Board Secretary, Hajiya Aisha Rufai.