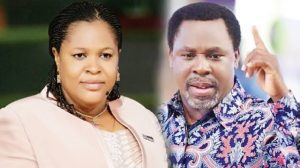 After the death Prophet Temitope Babatunde Joshua, (Alias TB Joshua) a year ago, the SCOAN  Followers celebrate their Founder’s 1st memorial anniversary service of the late charismatic preacher on Sunday, 5th of June, 2022, at the Synagogue Church of All Nations (SCOAN), Ikotun, Lagos,’ with the theme ‘celebrating the life and Legacy of TB Joshua’ .

The event was well attended by SCOAN  followers all over the world and other invited guests, it was a glorious and spirit-filled memorial worship service, it was real as if Prophet TB Joshua was alive.

The Torch news media in Lagos reports that the church has been operating low-key after the demised of the founder, this was done to honour the departed prophet and philanthropist.

Well known comedians, Ali Baba, KC Brown and Tee Mac were the Masters of ceremony and many other celebrities were also present at the Service.

Others, included Pastor Bernard Mulder of South Africa and Bishop Steven Ogedengbe from Nigeria and those that were not noticed.

Bishop Trevor Williamson, in his welcome remark, told the worshippers to celebrate, ” TB Joshua is not dead, but lives on.  “Since the day he exited to the higher realm, he has continued to appear to me in dreams with messages of upliftment to the congregation.“

“He is with the Lord resting for the mission he accomplished here on earth.“He is in heaven advocating for you, therefore, be happy and worship God in its true sense.

“His legacy, faith, and good works while here speaks volumes of a prophet anointed by God to save and serve the people at the global level,” he said.

Pastor Evelyn Joshua, widow of the late founder of the Synagogue Church of All Nations (SCOAN) Prophet TB Joshua, also spoke, at the 1st year anniversary celebration of her late husband in the church’s auditorium in Ikotun, Lagos.

In her speech, has revealed that she fought like every other woman for her husband’s love and attention.

She stated that she met Prophet Joshua a vegetarian, which constituted a major challenge to her to adapt to the system while growing up then,

“I told him, but all these things you don’t eat, I eat them. Today, by the grace of God, I am a vegetarian.

Speaking on the challenges of being wife to such a personality, she said she once walked into his office stubbornly, one Sunday and told the late prophet “Look, you will not attend to anyone today but me.”,

she said they began to dialogue and it was Mama Akinola (who she called on stage), one of the two oldest female members of the church, who saved the day.

“Her motherly advice kept me from the part of error,” she recalled.

She called out another woman, Mrs Felicia Olowofeyeku, whom she said always responded to her grievances with the line: “‘Are there not more important things than this?’

“In truth, when I look back, there were indeed more important things than those things.”

“With him, I learnt tolerance, perseverance, understanding and forgiveness. All those things have helped to shape my Christian life,” she added. She also revealed that she was the first Sunday School teacher of the church.

Apart from the Museum that was to be unveiled later at the event, Mrs Joshua stated that one of the church’s next biggest project will be to complete its prayer mountain in Arigidi in Ondo State. (one of the late prophet’s biggest dreams.)

Governor Babajide Olusola Sanwoolu was ably represented by his Special Assistant on Christian Affairs, Rev. Bukola Adeleke congratulated Mrs Joshua for preserving the memory  of her husband and especially on the commissioning of the museum.

He said “The real essence of life is not in the material wealth we amass but in the impact we make on people,”.

Ondo State Deputy Governor, Lucky Ayedatiwa, who represented Governor Rotimi Akeredolu, said: “Prophet TB Joshua came, he lived and died but he lives on because all what he did, the works, the signs and imprints are all there for all to see. Know this for sure, the work of God can never die.” However, he promised Mrs Joshua the support of Ondo State government whenever the need arises.

Deputy Speaker of Cross River, Hon. Joseph Bassey also said: “As long as God lives, Synagogue Church of All Nations will not die.”He promised to come to the church to give testimony after the election.

Including, a documentary on the life of Prophet TB Joshua and early beginning of  SCOAN ministry and Presentation of TB Joshua foundation. It was indeed a long memorial anniversary service.