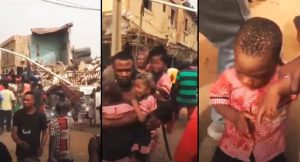 Buildings were affected and several people were injured, including children, in an explosion on Aba Road in the Sabon Gari area of Kano on Tuesday, May 17, 2022.

A report was received on the 17/05/2022 by 1000hrs that, there was a sound of suspected explosion at Aba by Court Road, Sabon Gari Quarters Kano.

According to a press statement made available by the Command’s spokesperson, SP Abdullahi Haruna Kiyawa said On receipt of the report, the Commissioner of Police, Kano State Command, CP Sama’ila Shu’aibu Dikko, fsi immediately led the command’s combined teams of Explosive Ordnance Disposal Chemical Biological, Radiological, and Nuclear Defence (EOD-CBRN) and Operation Puff Adder to the scene at a building located at No. 01, Aba/Court Road, Sabongari Quarters Kano opposite Winners Kids Academy.

At the Scene of the suspected explosion that led to a building collapse was cordoned up and four victims (3 Males and 1 Female) including a Wielder, named Mr. Ejike Vincent were removed and rushed to Murtala Mohammed Specialist Hospital Kano, where a Medical Doctor certified them dead.

Kano state government has clarified  that the early Tuesday morning explosion in the Sabon Gari area did not occur in a school.

The state commissioner for information, Malam Muhammad Garba said the incident happened at an animal feed store opposite the school along Aba Road, Sabon Gari area of Fagge local government.

He said while the cause of the explosion and the damage it had done is yet to be officially ascertained, investigation has since commenced to determine the cause, impact and measures to be taken.

Malam Garba called on the people in the state  particularly those living in the area where the incident occured to remain calm while government in collaboration with relevant agencies are working on the matter.

The commissioner assured that government would keep the public abreast on any development and warned people to desist from spreading unsubstantiated news.