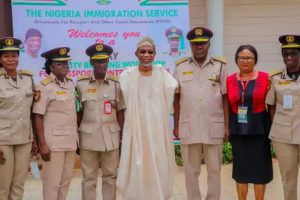 According to a press statement e-signed and released by the Nigeria Immigration Service’s Spokesperson, Assistant Comptroller of Immigration, Amos Okpu stated that, “The Minister of Interior Rauf Aregbesola has today declared a Two-Day Capacity Building Workshop for newly posted Passport Control Officers (PCOs) at the Service Headquarters, Abuja.”

According to the statement, “The Workshop with the theme “Effective and Efficient Service Delivery: An Imperative for Maximizing the Gains of the Passport Reforms toward a Seamless Passport Issuance Process”, is aimed at familiarizing the newly deployed heads of Passport Offices across the country with the basic operational knowledge of the electronic Passport environment.”

The Acting Comptroller of Immigration, Isah Jere Idris “Speaking at the event, the Minister of Interior Ogbeni Rauf Aregbesola urged participants to utilize the opportunity offered by the training to acquaint themselves with all aspects of the workings of the electronic Passport to enable them acquire the required competence for enhanced productivity in their Stations.” 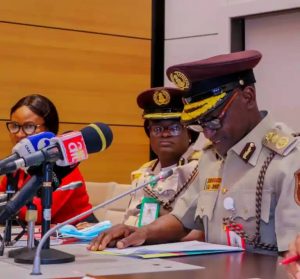 “The Minister remarked that as the main drivers of the ongoing Passport reform efforts, PCOs should be well grounded in Passport operations to enable them to regularly demonstrate the needed technical and leadership skills for improved service delivery across all the Passport Issuing Centres. This he noted shall be exposed to them during the workshop and thus called for maximum concentration to the lectures to be delivered by the resource persons.”

He assured that government shall continue to provide innovations that would evolve a seamless Passport application and processing system to not only restore and sustain the integrity of the process but also ensure that the national Passport is issued to only eligible citizens.

He therefore called on the PCOs to regularly exercise due diligence in screening and vetting of source documents to ensuring that the national Passport which is the highest symbol of nationality does not get into the hands of non-citizens.

He commended the management of the Service for the efforts made so far on Passport operations which have resulted in the issuance of about Three Million Booklets since 2019 to date despite the disruptions caused by the COVID-19 pandemic.

The Minister while assuring that any Personnel caught to be involved in frustrating the ongoing reforms to deliver an efficient Passport system shall be severely sanctioned also promised that the operating conditions of many Passport locations shall improve very soon.

In his remarks, the acting Comptroller General Isah Jere Idris stated that the Service will continue to sustain and improve on its commitment to training and retraining activities for its personnel with a view to deepening their competences for acceptable service delivery.

He maintained that the burden of carrying an untrained or poorly trained workforce is enormous particularly for a technology-driven agency such as NIS. He further stressed that there was no better time to organize training programmes for the PCOs than now considering the ongoing project of migrating the current electronic Passport structure to the enhanced electronic Passport regime which of course requires a huge deployment of ICT infrastructure.

The Acting Comptroller General recalled that upon assumption of Office last year September, he embarked on the exercise of clearance of backlog of Passport applications in various Passport issuance Centres.

The effort he said “has resulted in the clearance of all backlogs of applications in the South West geopolitical zone and parts of the North Central especially in the Centres that have migrated to the enhanced electronic Passport regime.

Similar exercise was carried out in the South East recently leading to about 80% success rate while efforts are being made to attain a 100% production and issuance across the Centres.

During the two-day workshop slated for the 12th-13th April 2022, the participants shall receive lectures on the role of ICT in Passport administration and issuance, expositions on modern skills in leadership as well as the primacy of customer satisfaction in service delivery among others. 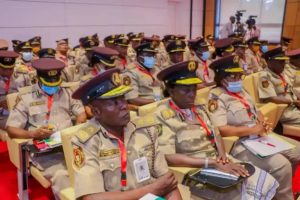 Participants at the workshop include all the Forty-five (45) Passport Control Officers who were deployed across the States following a Staff Posting Order that was released last Month.