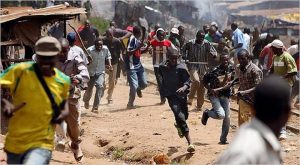 Some people reportedly hacked to death as cult supremacy battle spread. No fewer than seven persons have been killed in Abeokuta, the Ogun State capital, as cultists went on a rampage.

According to DAILY POST, in the past one week, members of the Aiye and Eiye confraternities have been engaging one another in a supremacy battle.

On Thursday night, a popular area boy, known as Tommy around Oluwo, was killed at Panseke, causing tension among residents.

The killing of Tommy, who was described as a leader of the Eiye cult group, might be in retaliation for the murder of a member of the Aiye group, it was said.

It was gathered that seven persons have been eliminated recently in various places in the state capital.

Before Tommy was attacked on Thursday, six others had been killed by suspected rival cultists, a source informed.

A source listed some of those killed so far to include “Scatter, School Boy, Alakanni, Tommy, Azeez, Olaosebikan and Babajide.”
They were reportedly killed at different locations like Asero, Kugba, Ikereku, Panseke, Adigbe, Oke Ijeun and Isale Abetu, all in Abeokuta.

“The killings have been going on since last week. Why many didn’t hear about them was because immediately they killed those guys, their relatives carried their corpses without informing the police.

“Everything got to its climax when Tommy was killed because he was a well-known person. Many didn’t believe he was killed not until they saw his picture. The police should continue to restore peace,” a source told DAILY POST on Sunday.

The PPRO in Ogun State Command, Abimbola Oyeyemi, has confirmed that there were killings in the state within the last one week, saying some people have been arrested.

Oyeyemi added that the police will now go after the landlords who harbour cultists in their houses within the state, adding that the Commissioner of Police has ordered that such landlords would be charged to court alongside the criminals.

Oyeyemi said, “We have launched a very serious operation on them. We are clamping down very seriously on them.

“About 18 suspects have been arrested during the last encounter we had with them and we are not going to rest until we get the last person of these hoodlums. We cannot be watching anyone making life difficult for the members of the public.

“The Commissioner of police has put on red alert, all area commanders and all tactical team commanders that they should go out and take the battle to the doorsteps of these hoodlums. We must fish them out one after the other.”
Meanwhile, Governor Dapo Abiodun has vowed to deal decisively with anybody fomenting trouble in Ogun.

The Governor said his administration would not allow anybody to disrupt the peace being enjoyed by residents of  the state, advising parents to warn their children.