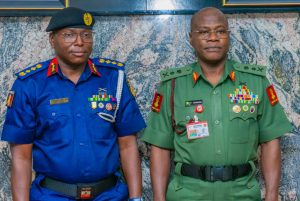 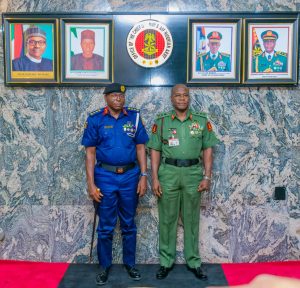 Determined to arrest the insecurity affecting the nation, Nigeria Security and Civil Defence Corps (NSCDC) and the Nigerian Army have in a renewed synergy and collaboration resolved to confront different forms of security challenges bedeviling the nation.

In a statement signed by the Director Of Public Relations NSCDC National Headquarters, Abuja, DCC Olusola Odumosu noted that the Army which had in the past, trained NSCDC personnel in Counter-Terrorism and other law enforcement areas in Kachia and Kontagora, Kaduna and Niger States respectively, has also accepted to collaborate with the corps in other areas of strategic needs. 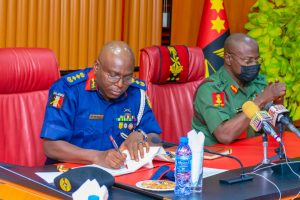 Speaking during a courtesy visit to the Chief of Army Staff (COAS), Lt Gen Faruk Yahaya, the Commandant General of NSCDC, Ahmed Abubakar Audi, PhD, mni, recalled how impactful the Army has been to the Civil Defence Corps, citing the recent training of members of the Special Female Squad at Katsina by 17 Brigade, Katsina and how well members of the squad deployed to schools are discharging their duties.

Adopting the non-kinetic approach, the corps helmsman explained that the newly established Special Female Squad through the School Community Security Vanguard (SCSV) has been able to ensure relative security of schools through intelligence sharing. 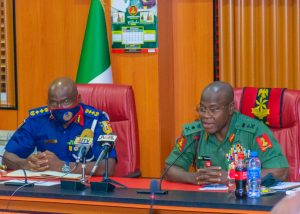 The CG assured COAS and other security agencies in the country of the Corps readiness to continue synergizing in the areas of intelligence sharing and other joint security operations for enhanced security of lives and property and protection of Critical National Assets and Infrastructure.

Responding, the COAS, Lt. Gen Faruk Yahaya, assured NSCDC of his willingness to maintain synergy with the Corps, explaining that synergy and inter agency cooperation forms part of his vision for effective service delivery.

The COAS expressed the readiness of the Nigerian Army to harness the potentials of NSCDC and leverage on the existing relationship with the organization whose presence is in all the local governments areas across the nation for optimal performance.

Citing Operations Polo Shield among other Joint Security Operations the Army have performed with NSCDC, Gen Yahaya commended personnel of the Corps for their professionalism and dedication to duty especially in the South South, North East and deployment for the purpose of election and others. 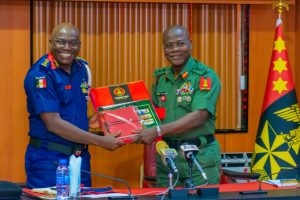 He applauded the CG for his efforts in transforming the service and upholding professionalism upon his assumption of office. He promised the Army readiness to assist with more trainings for the personnel, assuring that his doors are opened and reiterating that there is no alternative to training and capacity building of personnel.