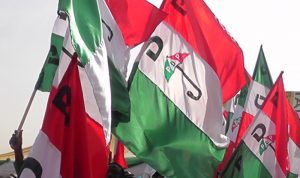 While the exercise was peaceful in Adamawa and Kwara states, there were some affrays in Lagos and Oyo State, where a member the party, identified as Omolaja Alao, was attacked by suspected political thugs during the factional congress of the party at Jogor Centre, Ring Road, Ibadan, the state capital.

The victim, in his seventies, who is also the chairman of ward 1, Ibadan Northeast Local Government Area, was attacked at the main entrance of the venue of the congress.

According to reports, Michael Okunlade emerged as chairman in a congress conducted by a faction loyal to a former majority leader in the House of Representatives, Mulikat Akande-Adeola.

In Okunlade’s acceptance speech, he promised to pacify all members and work towards the development of the party.

In his acceptance speech, Dayo Ogungbenro thanked all the members for giving him the mandate, promising that there would be no leader nor servant during his tenure.

In Lagos, according reports, the exercise was cancelled following violence that broke out at the venue of the congress which held at the. Tafawa Balewa Square, Lagos Island.

It was learnt that voting was about to commence when some thugs allegedly invaded the venue and disrupted the exercise.

As a result of the tumult, the electoral committee chairman, Engr. Johnson Abounu announced the cancellation of the congress.

The party through a statement by its outgoing publicity Secretary, Taofik Gani blamed the ruling APC in the state for the botched congress. He said the PDP was having a unity congress with all interests converged at TBS when the disruption happened.

Meanwhile, the Kwara State chapter of the PDP has elected a former Speaker in the State House of Assembly, Alhaji Babatunde Mohammed as the new chairman of the party in the state. Mohammed replaced Kola Shittu, an engineer, who has served over three years in office.

A former commissioner for communication in Kwara State, Alhaji Babatunde Ajeigbe, administered the oath of office on the new party leaders.

In his remarks, the national leader of the PDP and former Senate president, Bukola Saraki, said the peaceful congress was a sign that the party was ready to lead and take back power in the state.