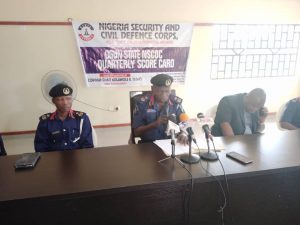 OGUN NSCDC SCORECARD: THE COMMAND IS POISED AT REDUCING VANDALISATION TO ZERO LEVEL, PROTECT CRITICAL NATIONAL ASSETS/INFRASTRUCTURE, COORDINATE DRIVES TOWARDS EFFICIENT DISASTER MANAGEMENT, BUILD AND EMANCIPATE EFFORTS ON INTELLIGENCE GATHERING, IMPROVE ON THE EXISTING ROBUST RELATIONSHIP BETWEEN/AMONG OTHER AGENCIES FOR EFFECTIVE SECURITY IN THE STATE AND ITS ENVIRONS.

As part of our efforts at ensuring adequate protection of government critical infrastructure and national assets, the Nigeria Security and Civil Defence Corps, Ogun State Command, has reduced Vandalisation to zero-level through improved intelligence, surveillance and monitoring of our pipelines across its stretch in the State and this is the reason we have recently not experienced pipeline vandalism for a while.

In a statement by the state spokesman, Dyke Ogbonnaya noted that in order to improve the drive against vandalisation in the State, Commandant Taiwo had  deployed tactical, surveillance and intelligence teams who also monitor the performance or otherwise of personnel across the pipelines and this has, over time, yielded positive results and brought vandalisation to zero-level.

Also contributing immensely to that is the recent restrategisation in the command’s structure by creating more divisions and area commands to further reduce the work loads on others while giving greater room for easy monitoring by the Area Commanders and Divisional Officers. 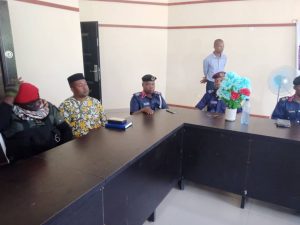 At this point, the command is now ran through nine area commands and 61 divisions offices which makes the supervisory roles for each divisional officer more effective and efficient.

Also, in the past few weeks, the Disaster and Rescue Management Department of the Command with the instruction of my humble self have been educating and orientating the general public on the impending dangers of improper waste disposal particularly the adverse effects when the drainages in our major cities are being taken over by plastic bottles, nylons and a host of other non-degradable substances.

The overall result is the overflowing of our roads with water thereby sabotaging government’s efforts at improving our infrastructural needs.

Still on the protection of Critical National Assets and Infrastructure, the command had reappraised the need for at least three Agro-Rangers Bases in the State which, in the first instance, would cater for each of the key three geopolitical zones in the State: Ogun East, West and Ogun Central and with all hands on deck, issues about herders and farmers conflicts should be a low ebb.

However, we have not also erased the possibilities of crisis, infractions and uprisings between/among pockets of farmers/herders and this makes our Peace and Conflict Department handy to resolve conflicts rising from such unforeseen circumstances whenever it comes up.

I represented the Corps and the command in the resolution of the Ibese Crisis especially in bringing a lasting peace and harmony among the people living in and around the environment. I made adequate submissions and offered professional advice on how the Dangote Cement, the citizens and everyone could interrelate and avoid possible rancour in the future. 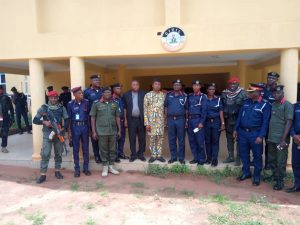 The command also recently launched the NSCDC/ALPSPN’S task force team to enable them comb the State in the bid to flush out unregistered private guard companies as instructed by the Corps Commandant-General, Ahmed Abubakar Audi (PhD, mni). This step, according to the Commandant General, is one in the right direction especially as it would assist to identify unregistered PGCs while also helping to reaffirm to them their relationship with the NSCDC in terms of intelligence gathering and sharing.

The Private Guard Companies (PGCs) of the Nigeria Security and Civil Defence Corps, across the country apart from being duly registered, trained, licensed and supervised are also being used as a second phase in intelligence gathering as the PGCs are also very close to the grassroot and comes in contact with the activities across their domains. To that extent, it is strategic to allow only a duly verified, approved and certified Nigerian to run such an enterprise considering our national security and the lives and property of the people.

One of the main stay of any organisation worth its onions is the abilities of such agencies to gather, process and deploy accurate and timely intelligence and information to forestall disaster, deaths and dire consequences on the people of the State and its component environs.

I also continued the retraining exercises for all operatives of the Corps and also launched the *Ogun State Special Female Armed squad* as directed by Commandant General.

As I speak with you now, plans are under way to audit and streamline all arms bearing personnel in the Corps to ascertain their level of behavioral conduct and pyschological capacity in bearing arms. This programme would be a comprehensive one as it would involve everything that has to do with realigning all arms to actually bear arms without being a disaster, threat and problem to either themselves nor any one at that.

For short, we want to make all our arms bearers core professionals before, during and after their duties.

To maintain adequate protection of pipeline, Commandant Taiwo made tactical redeployment of Officers on pipelines. A move he made in maintaining zero-tolerance on pipeline vandalism.

Furthermore, within this 100 days in office, I have secured the release of eight seized vehicles from the naval dockyard to aid adequate court processes.

I have also continuously interfaced with all relevant stakeholders as the Nigerian National Petroleum Corporation (NNPC); the Department of Petroleum Resources (DPR); the Joint Admissions and Matriculation Board (JAMB); the West African Examination Council (WAEC); among other agencies.

I have continued to have a robust relationship in both field and intelligence sharing between/among other services in the State. Let me also say, with all sense of professionalism, state that this relationship is evolving and yielding positive results for the State.

To crown it all, on Thursday, September 9, 2021, all Service Commanders in the State trooped out to join in the burial of the father of the Chief Security Officer in Ogun State, His Excellency, Prince Dapo Abiodun (MFR), the Executive Governor, Ogun State. I contributed my quota to make the occasion not just safe but worthy of the deceased, Late (Dr) Emmanuel Adesanya Abiodun, who was buried in grand style amidst visitors from all over the world.

Let me end this 100 days address and before attending to your questions say that the State Commandant Government have tried immensely to improve the lots of all security agencies in the State and particularly, Civil Defence and I must say a big thank you for that however for the continuous protection of lives and property; maintenance of our critical national assets and infrastructure and improving surveillance and intelligence across the State, the Corps, NSCDC, needs more logistics in terms of vehicular movements to improve its efforts in security activities across the State.

Thank you so much for your attention, I appreciate you all and immensely. 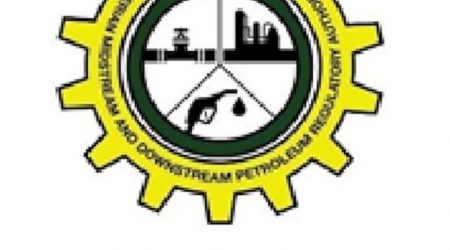