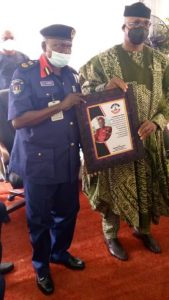 Meanwhile, Commandant Taiwo also considering the current situation also decided to equally use the opportunity to pay an official courtesy call on His Excellency.

In a statement signed by the NSCDC State PRO, Dyke Ogbonaya noted that the Commandant Taiwo also presented the mission and vision of our Corps Commandant General to the Chief Security Officer of the State.

According to the State Commandant, “it is no longer news the efforts of the governor, at all times, at ensuring the safety of lives and property in the State through the provisions of logistics and other sensitive security gadgets.

In the same vein, the Governor while thanking the state Commandant, for the kind gesture. He promised to continue to be of immeasurable support to all security agencies in the State in order to forestall all acts of violence and banditry in the State.

Governor Abiodun also promise to give more support to the Corps in other to boost its operational capacity in the State.

Commandant Taiwo also promised the governor to continue to work assiduously with all services in the State so that the peace and tranquility being enjoyed in the Gateway State would continue to thrive even beyond its level presently.