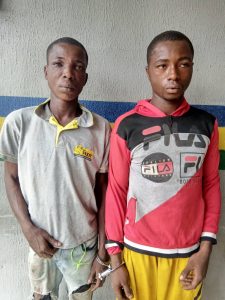 In a statement signed by the PPRO, CSP Adejobi noted that the armed men had attacked with dangerous weapons, some of the parents and guardians that accompanied their children to the venue of the examination but the anti crime patrol team stationed at the examination venue responded swiftly and arrested the two suspected robbers, while others took to their heels.

Lagos State Commissioner of Police, CP Hakeem Odumosu, has directed that the suspects be tranfferred to the Command’s Special Squad, Ikeja, for proper investigation and possible prosecution, while the fleeing members of the robbery gang be apprehended.

The Police boss has however reassured the general public of adequate security of lives and property and public safety in Lagos State as he emphasised on constant security at all schools and colleges in the state.