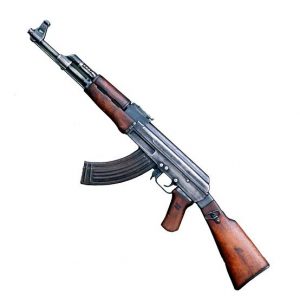 A lance corporal of the Nigerian Army has exposed some suspected kidnappers, who approached him to purchase an AK-47 rifle at the rate of N1 million.

The Soldier, whose real name wasn’t given for security reasons is attached to the Alamala Barracks, along Ayetoro-Abeokuta road in Ogun State.

According to the Soldier, some Fulani men came to him on April 7, asking him for weapons which would be used in their kidnapping business.

In his response, the Soldier asked the kidnappers to meet him the following day, saying he would connect them with a vendor.

But instead, the Soldier hurriedly reported the incident to the DPO of Ilupeju division in Abeokuta North, who on details of the report, mobilized a team of Police operatives from Ilupeju and Lafenwa divisions, operatives of OPC and So-Safe Corps, together waited patiently for the Fulani men at the point of business transaction.

It was learnt that the DPO had pretended to be the vendor of the AK-47 rifle when the suspected kidnappers finally showed up at the location.

Not knowing that they were negotiating with a Policeman, who pretended to be a vendor, the kidnappers offered to pay a sum of N1 million. However, the men reportedly brought out N200,000 as part payment, promising to pay a balance of N800,000 by 8am the following day.

In the process, they were rounded up, arrested and later transferred to the state criminal investigation department, Eleweran, Abeokuta.

The Fulani suspects were identified as;

The arrest was confirmed on Thursday by the Police Spokesman Ogun State Police Command, Abimbola Oyeyemi, who stated that the suspects are currently in Police custody.